The quiet present and uncertain future of Dutch nightlife

As it has spread, COVID-19 has affected all aspects of life. Though the specter of infection has receded somewhat, the virus lingers and many rightly worry that it will continue to threaten lives and change lifestyles for many months to come. No one knows how long the pandemic will last, but it is clear that certain facets of life are more affected than others. No industry or activity faces as much disruption as nightlife.

As of June 1st, people in the Netherlands are cautiously returning to offices, restaurants and museums. If all goes as planned, residents will be able to visit gyms, saunas and casinos from the first of July. But when and how nightclubs and concert venues will return to anything resembling normal operations is anyone’s guess. Nightlife, a touchstone of Dutch society (at least from the perspective of many foreigners), is being left behind.

The problems of partying in a pandemic

There are valid reasons why clubs and venues are not emphasized in the government’s reopening plans. More so than bars and theaters, opening dance halls raises real challenges for societies battling pandemics. Crowds of people moving against each other in a closed environment presents an excellent avenue for viral transmission. The use of alcohol raises the risk that patrons will not exercise sufficient caution. South Korea and Japan, two countries noted for their effective response to the pandemic, suffered setbacks in their struggle against the virus after clusters of cases were tied to nightclubs. Clubbing, as it is usually practiced, doesn’t seem compatible with social distancing.

So how are venues and artists dealing with the situation? And how might authorities support nightlife?

The simple fact is that establishments all over the Netherlands are struggling. With doors still closed to the throngs of dancers who, in normal times, line up outside their doors each weekend, venues have seen their revenue streams evaporate. While bars are making up some of their losses by filling terraces with eager drinkers, large indoor venues cannot meet their costs by operating at massively reduced capacity. Lacking strong financial support from the government, everyone acknowledges that many businesses will go under.

From the moment he came into office, it was clear which issue would dominate Pat Smith’s term of office as The Hague’s nachtburgemeester (night mayor). Pat’s election on March 31st was supposed to culminate in a public party at Paard, the city’s largest music venue. It took the form of a livestream instead. “All the problems surfaced right away,” he said. Pat immediately joined the effort to bring the nightlife community of The Hague together in this time of crisis.

15 years ago, such a task may have been more difficult. Back then the scene was more competitive, noted Eva von der Assen, the night programmer at Paard. Things change. Even before the pandemic, clubs were generally on good terms. Staff collaborated. Everyone shared a social circle. So when the crisis hit, people came together quickly. Pat had stickers printed proclaiming “We zijn Haagse Horeca” (We are the Hague’s hospitality industry”) and had them plastered around town. Venues across the city got creative and shared strategies for coping with the crisis.

Coming together to keep from falling apart

Pat communicated with the Global Night Alliance, and spoke with nightlife entrepreneurs and night mayors all over the world. People everywhere were in the same situation. They commiserated. Through the VNPF (an organization of Dutch venues and festivals), clubs across the Netherlands developed a reopening protocol to submit to the government. It was, Pat suggests, a fine example of the much-vaunted ‘polder model’ of Dutch civic society: those directly involved pitched ideas, councils voted and the health authorities made the final decisions.

Nevertheless, the reopening procedure leaves nightlife in a dire situation. An event scheduled in May hoped to draw thousands of viewers to a livestream featuring a DJ and small number of lucky party-goers at Paard. Despite insisting that they would follow all guidelines, the event was cancelled the evening before by The Hague’s municipal authorities, who said that venues were not allowed to open under any circumstances.

Though most establishments will be allowed to accommodate up to 100 guests next month, for many this is nowhere near enough to break even. Still, those in the scene are committed to providing the important social and cultural role their establishments provide. “We’d rather lose money than do nothing,” Eva said.

So many venues are reopening, albeit in different forms. Paard will soon be announcing a show. 100 tickets will be sold and concert-goers will sit rather than stand. It will take place before nightfall on a Thursday and serve as a ‘test case’ for how events might be held in foreseeable future. Tape has been laid throughout the building for future patrons to keep their distance. For the rest of the time, Paard has joined countless others in selling merchandise. A ‘for sale’ placard on the venue’s sign almost gives the impression that the building is for sale. But the situation is not so dire: Paard is merely trying to sell the sign to raise revenue. 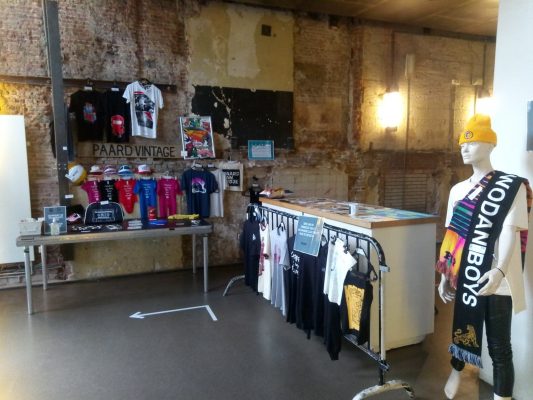 Het Magazijn, a small venue in The Hague which is a part of the Bleyenberg building, has begun to sell merchandise through a new web-store. Such ventures don’t generate much revenue, but every bit counts. Because it is technically a bar rather than a dance hall, Het Magazijn was able to reopen this month. The shape of the cozy club’s latest events are a sign of things to come. The 30 guests who were allowed in all had to register beforehand. Arend, a programmer at the club, was happy to reopen. But he acknowledged that doing so while upholding regulations and meeting regulars’ expectations is “very difficult.” Despite the limitations, he implored people to support their favorite venues. “We are opening. Yes, it’s a bit awkward, but the music is good. The atmosphere is good. And entrance is free.

Banished from the stage, artists struggle

Staff at Paard and Het Magazijn agree that circumstances mean they will shift emphasis from dancing to listening to music —a consequence of making guests sit rather than stand. The clubs are aiming to increase people’s sense of community with their favorite venues. Selling merch might increase this emotional connection too, which could be more valuable than the actual financial support of small fry transactions. It is hoped that this loyalty will help carry venues through this time of uncertainty.  Both venues say they will be placing greater emphasis on supporting local artists.

One such artist is Chris. He performs and records music (which he astutely describes as “deep, trippy, psychedelic and sometimes a bit rough on the edges”) under the name Spekki Webu. Considering that his own creative process springs from emotion and experience, he believes the pandemic may offer inspiration to many artists. Though he misses performing, he isn’t letting it get to him. “It is what it is,” he said, demonstrating the stoic attitude adopted by many in the scene.

Just as the club owners do, artists like Chris accept the logic of current restrictions. But despite widespread support for the reopening procedure, people in the nightlife industry are plagued by uncertainty. Some lament that the protocol is based on uncertain information. The requirement of keeping distance is a broad measure, and does not affect all venues equally. “I am not sure if [the requirement that people stay 1.5 meters apart] is something everyone believes in” said Arend, citing the ever-changing recommendations of health experts. “I would like to see these facts confirmed,” he continued, displaying hope that regulations might be rationalized and relaxed.

The night mayor also recognizes the problem. “If you have to keep 1.5 meter distance, no one will make money,” Pat said. Moreover, the experience will be different and people might lose interest. He thinks the government may be moving too slow, but cautions people against complaining too much. “It’s all negotiations,” he said. Chris agreed, acknowledging that “the scene can’t survive with only 30 people at a time.”

With so much pressure in play, one wonders if the crisis may eventually erode the feeling of community within the industry. Even as they rely on the support of fans (for example by convincing patrons to buy merch and delay seeking refunds for cancelled events), venues will face more competition from each other. This worries those in the scene who appreciate the generally positive vibe it has fostered. “We’re all going to be struggling,” Eva said, hinting at the dire consequences these struggles might create. Though clubs emphasize their desire to collaborate and help each other, it seems plausible that the crisis will lead to a more adversarial energy within the sector.

The future is coming. But what will it look like?

There is no magic bullet to help clubs survive. Nor is there any obvious outlet for those who yearn for their lost nightlives. Some propose that livestreams could be monetized to help venues stay afloat and keep music fans placated. But most in the scene are skeptical. “People want to be on the dance floor, to actually see the artists. They want the real deal,” Chris said. Still, venues and artists support experimentation with new mediums that are compatible with social distancing.

But most have a realistic attitude. Sometimes this verges on pessimism. Asked about her plans for a special reopening party when the virus is gone, Eva sighed. Initially, her imagination went wild, conjuring pictures of a huge welcome back party. “But now, I more and more feel that we won’t have a big reopening. It’ll happen slowly. People will want distance. It will be less warm.” She is confident that Paard will survive the year by tightening its belt, but is less certain about the scene’s future in the longer term. Smaller, less established venues have more to worry about. But even Paard is busy filling out forms, requesting subsidies from a government which has placed nightlife near the bottom of its list of priorities.

She wondered if things will ever return to normal. “In the whole history of mankind, we have made developments in hygiene,” she mused. Will the pandemic engender such a permanent development? On top of washing their hands, might people in the future continue to wear masks in public, like many in East Asia have done for years? Could we be expected to avoid close contact with strangers, to shun the mosh pit? Or will we merely have to register before going clubbing and have the bouncer check our temperature along with our ID? Whatever the case, is a grim prospect, particularly for those who appreciate the freedom and care-free pleasures of a night out.