The ’45-’49 war in Indonesia: a page of Holland’s history it would like to forget

17 August 1945: Indonesia, the largest colony in the Dutch Empire, declares itself independent. Leveraging the words of Queen Wilhelmina, who promised support for a conference to decide the future of the area, nationalist leaders Sokarno and Mohammad Hatta proclaimed the Republic of Indonesia 70 years ago by signing a short document. 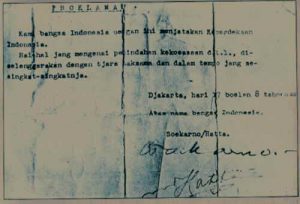 The Netherlands did not like the decision and, supported in its first stages by England, promoted a military intervention in the country: between 1945 and December 1949, the month in which the Netherlands formally recognized the independence of Indonesia, much blood was shed. These four years were the years of the war of decolonization, marked more or less by intense clashes, massacres and very harsh operations by the “colonial police” (Operatie Product and Operatie Kraai) that did not defeat a fierce popular resistance. 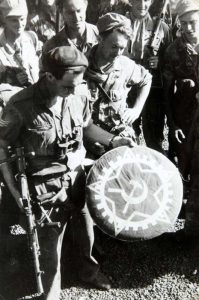 The violence was condemned by the United Nations: with Resolution 67 of the Security Council, the UN decided to decolonize the former East Indies of the Netherlands. What was decisive, however, was the disengagement of the United States, who was little inclined to antagonize a potential ally in the Asian chessboard.

The Dutch fear of losing US support led to the negotiating table (Den Haag, August 1949) and the definitive withdrawal of troops from the region. The consequent dismantling of the colonial army (Koninklijk Nederlands Indisch Lege – KNIL), composed of Christian-protestants loyal to the Crown, unleashed a new cycle of violence, culminating with the proclamation of the Republic of the South Moluccas (Republik Maluku Selatan – RMS): a formation that gathered part of the archipelago, with Ambon as its capital and supported mainly by ex-military KNIL.

The rebellion was briefly suppressed by the Indonesian army and the only help that came from the now ex-Madre Patria was the permission to move to Holland. 12,500 Moluccan refugees arrived in Europe, going down in history as one of the first post-colonial migrations.

The reception was certainly not the best: the refugees were immediately relegated to ghetto areas such as Westerbork, a former Nazi concentration camp near Assen. And while today the Indonesian community represents the largest ethnic minority in Holland, 1/4 of them originate from the South-East islands of the country.

Then Republic of Maluku issue is an open historical problem. The first president Chris Soumokil died, executed by Indonesian authorities in 1966, and after the abandonment of the Republic by the Netherlands, three presidents took turns in exile.