On a subdued Saturday evening, The Hague elects a new night mayor

Though the spread of Covid-19 has brought with it a complete shutdown of nightlife in cities across the globe, last weekend, just before the lockdown, Pat Smith was duly elected to the post of night mayor, which he will hold for two years.

The position of night mayor is unfamiliar to most, and though it has been exported to a few countries, it has its origin here in the Netherlands. A night mayor is supposed to represent city-dwellers who enjoy dancing, clubbing and making-merry at all hours of the night. Such activities, which undeniably contribute to a city’s vibrancy, are often curtailed by local governments which introduce things like noise ordinances at the behest of citizens who are less nocturnally active. The idea is that a night mayor can act as a voice for those who like to go out. It is an unofficial position and actual authorities follow the advice of night mayors at their own discretion.

As originally envisioned, residents of The Hague would vote online for their choice of night mayor in the weeks leading up to a massive, unticketed party where the winner would be announced. The event was due to take place at Paard, one of The Hague’s most famous clubs. Instead, the event transpired as a 20 minute livestream which aired on Saturday night. Nevertheless, the results are as binding as those to an unofficial position can be.

The two candidates, selected from many applicants by the broader Nachtraad (Night Council) organization, were Pat Smith and Cary van Rheenen. The livestream, which took place physically at the Bleijenburg bar and virtually on Facebook, was an informal affair filmed on a smartphone mounted to a selfie stick. Each candidate was given an opportunity to briefly articulate their platform. Cary emphasized that supporting the owners and operators of nightlife venues would be his top priority.

Pat affected a kind of jovial nervousness during the talk, asking the interviewer if he could smell his sweat. He joked that the virus might be the “nail in the coffin” of nightlife in the city, but said that when the pandemic subsides people should “come back twice as hard” and splurge the money they might have saved while under lockdown. “Then we’ll all be good,” he added. 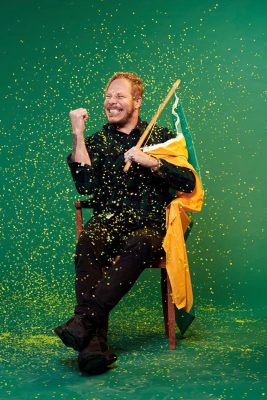 The final vote came in at 2162 votes for Pat and 1610 for Cary, an increase in turnout from the 2018 election. Pat, sporting a “Make The Hague Great Again” hat, was then given the night mayor’s ceremonial necklace. Both men shook hands before being admonished for this break of virus protocol. They then duly bumped elbows, following the prime minister’s instructions while replicating his own lapse (PM Rutte was recently lampooned in the press for shaking hands moments after urging people not to do so).

It seems unofficial night mayors and leaders of countries can easily fall into the same traps during these trying times. As the new face of nightlife in The Hague, the new Nachtburgemeester has a difficult task to deal with: rethinking and supporting entertainment in a time of “contact less” society. How will he cope with it? How will clubbing be affected by the realities of the lockdown? Only time will tell.