In 1625, the West India Company landed on the east coast of the North American continent, founding a fortified village named Nieuw Amsterdam. The citadel, born in the southern part of Manhatten island, was created to allow companies involved in the fur trade, in the Hudson River Valley, to defend river access.

Nieuw Amsterdam thus became the largest colonial settlement in the province of New Netherland, a territory now included in the “Tristate area” – the metropolitan area formed by the city of New York, the southern part of Connecticut, and the eastern part of New Jersey.

The Dutch hegemony over the city, however, did not last long. In 1664, the city fell into the hands of the English who renamed it New York after the Duke of York, brother of King Charles II. The Dutch retook it in August 1673, but the following year the province of New Netherland was permanently sold to the English.

Although under English control, the Dutch formed a prominent influence in New York starting in the 1700s and Dutch remained the most spoken language by most of the population there until the middle of the century.

Thus, despite its short life, a part of old Nieuw Amsterdam continues to live in modern New York.

Not only do the old city maps show that Wall Street, Broadway, and Long island existed as translations of the Dutch names Wolstraat, Breede Weg and Lange Eiland, but also Brooklyn, Harlem, and Staten Island clearly have the same origins. 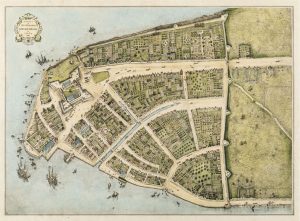 One of the areas where Dutch legacy is still very visible in New York is in the Brooklyn neighborhood of Red Hook. The olden De Roode Hoek was a port area used for loading and unloading goods. The area, which overlooks the sea, retains its industrial charm and houses some of the oldest buildings in the city, most with a decidedly Dutch touch. Its main arteries, the lively Van Brunt street and the younger sister Van Dyke street, are still a reflection of ancient Nieuw Amsterdam.

Apart from urban planning, traces of the Dutch transition onto the American continent appear in the cultural sphere. As for the language, some traces of Dutch remain in American English, as in the word “cookie” (in England biscuit). Roosevelt and Vanderbilt, to name just two, are descendants of Dutch settlers who famous names in the USA.

Nowadays, almost 5 million Americans claim Dutch origin. For this reason, festivals that celebrate Dutch traditions are scattered throughout the country. Particularly folkloristic are the king’s party in Portland (Oregon) and the tulip festival in Orange City (Iowa).