In the past few months we have seen stuff we have never before and those drastic changes that Covid crisis brought with it has been difficult for many, such as Amsterdam’s artists who were forced to find new ways to create their art and gain inspiration.

We can think back to the age of the bubonic plague, how it changed the lives of millions of people and it turned outbreaks into a recurring part of life. Most of the art we have experience since Renaissance time, was created under the bleak reality that the Black death could at any time overthrow the present. When Amsterdam was hit hard during the mid ‘1600, Rembrandt some of his most iconic work. So how has present day s outbreak affected art production in Amsterdam? We have virtually sat down with some of the City’s creatives to find out.

Ahmad is not unfamiliar with creating art under a crisis: hailing from Palestine and Syria, much of Ahmad’s inspiration comes from the effect the asylum crisis has had on his life. His tattoo moniker is stateless-poke. Ahmad studies fine arts and was about to start with his graduation project when lockdown hit the Netherlands.

As the onset of social distancing began, Ahmad felt creatively stifled. This creative block lasted one month, after which he decided to switch his graduation project to hand poke tattooing. “I’m making a series of photos and working on a documentary while tattooing my story on my body. Every tattoo has a story behind it and a reason to be on my skin. I’m poking myself in different rooms and places in my house. It’s a painful procedure to tattoo yourself so often in such a short time.” Hand poked tattoos are often associated with ‘prison-style-tattoos’, and for Ahmad they are an embodiment of the current isolation we all are experiencing. Ahmad is using his art to tell his story as a refugee, to bring attention to the ongoing crisis back home. 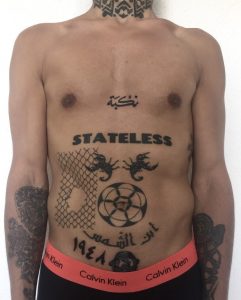 Marrow, an illustration artist from Damascus, Syria, also found herself struggling to stay optimistic over the course of the past months. “’I’m an hyperactive person. Mentally, physically being obligated to stay home is a tough thing, which sometimes makes me unable to be creative.” Marrow has been experimenting with different techniques, finding inspiration from the digital world. Her designs are eye-catching, with striking color schemes, often representative of relevant issues and common human experiences. Her most recent series addresses topics such as racism, dictatorship, sexism, as well as her feelings during quarantine. “I can say that I’ve transformed this turmoil into art, as every artist does in one way or another! It was an opportunity to try something new, fun, and priceless!” 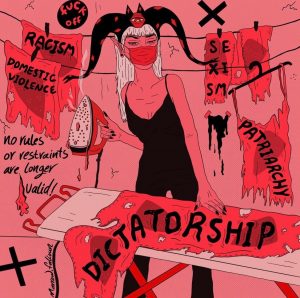 Alina is the creator of Giant Pansy, she’s an Amsterdam-based artist working with printmaking, floriography and design. Alina opened her own studio on Czaar Peterstraat at the beginning of March, at a time where uncertainties were escalating and the future of many businesses became unsure. “I felt a lot of frustration on this new project, but also not knowing if it would be able to happen at all in the future. There were a lot of tears, restless crap days, and moping (there still are!)” Despite those challenges, Alina has been able to stay hopeful and maintain an objective mindset. “What’s happening it’s pretty scary: we haven’t gone through this before, and people who are less lucky  are those going to suffer the most. So I feel really frustrated and annoyed that I can’t do more to help. I put my situation in perspective and try to remind myself to be kind and gentle.” 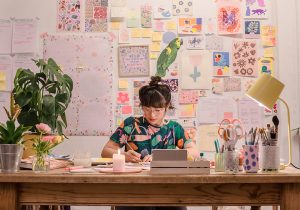 Since much of society’s interactions have turned digital, many artists have embraced new ways to connect with their audience as well as the artistic community. Alina, for instance, has taken part in several online art initiatives including a DIY Art Market, online Instagram art galleries, and The Cool School‘s Lunch & Learn session: video call workshops. “For The Cool School I did two sessions: introduction to gouache and watercolor, and a general painting session which was really nice to feel a little less lonely.” 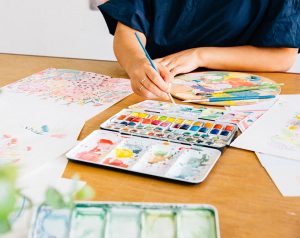 Many artists experience a sense of urgency or pressure to carry on the creative process during quarantine. This can boost frustration and make creating and finding inspiration even more difficult. But Alina emphasizes that it’s important not to be so hard on oneself during those times: “I think my conclusion is to stay present, feel what you need to feel (it’s okay to be sad, mopey, feel like a complete potato), reach out to your friends and take it easy and be kind to yourself and others. I think when you are feeling healthy and happy, the creativity will come naturally and not out of guilt.”