“I don’t want to write you details, they are too sad.” It was July 27, 1890. Vincent Van Gogh had shot himself, and Theo sent these words to his wife, Johanna Jezina van Gogh-Bonger, after having rushed to his brother’s bedside in Auvers-sur-Oise. He accompanied him in his agony and, after having buried him, he returned home. It was the beginning of the end for Theo, too. Johanna’s attempts to save her husband- pushing him to return to his work and bringing him to the best doctors in France and the Netherlands- would have been in vain.

Theo died only six months later, prostrated by the pain for his brother’s suicide and weakened by his long-compromised health. From that moment on, Johanna’s life changed forever. Suddenly she was alone, having a child not even a year old, Vincent Willem, and the house swamped with hundreds of paintings and drawings of her brother-in-law, hanging on the walls or rolled up and placed “under the bed, under the sofa, under the wardrobe,” along with mountains of letters.

“I am alone and lost,” she admitted. “But I have a mission in my life.” She immersed herself in reading the correspondence between Theo and Vincent, very well-known nowadays, full of inspired descriptions that the painter himself made about his own paintings. But she also found his most intimate confessions. And this is how she discovered, as in a revelation, the value of her brother-in-law whom she had the chance to meet just three times in her life. “I have read them and read them again until the figure of Vincent finally appeared clearly in front of my eyes.” At that moment, she understood the great responsibility she inherited: to make the work (until then ignored) of Van Gogh known. Perhaps already sensing that it would not be an easy task.

In spite of everything, we have information about Jo Bonger’s life and the challenges that she won,  thanks to her four diaries. She wrote the journals between 1880 and 1897 and they have been available since 18 September of this year in the English version of the digital edition published by Hans Luijten, senior researcher at the Van Gogh Museum, on the bongerdiares.org website.

It is because of the letters of Van Gogh that we can recompose the story of the Dutch artist’s life, avoiding the mythical image of an insane and brilliant painter. In a similar way, Johanna’s diaries give us the opportunity to reconstruct the true story of the painter’s posthumous fortune and enlighten us on her own little known but essential role in the enhancement of the Dutch painter’s work. The books present over five hundred pages of precious memories and notes. On March 26, 1880, in Amsterdam, she wrote: “Today I begin my diary. I used to laugh at anyone who did it, for I thought it foolish and sentimental and I also believe that a lot of girls do it as an affectation […]. For in the routine of daily life, there is so little time to reflect, and sometimes days go by when I don’t actually live, but let life happen to me, and that’s terrible. I would think it dreadful to have to say at the end of my life: I’ve actually lived for nothing, I have achieved nothing great or noble”. That was the first page. She wrote it at seventeen and a half, when Vincent Van Gogh, twenty-seven at that time, was just starting to paint.

Jo was born into a wealthy family of Amsterdam and as a teenager, she already had clear ideas. Devoted to the study of languages, she was allowed to go to London to improve her English; there she developed a passion for romantic poets- Shelley in particular – and read piles of books from the likes of Byron, Carlyle, and Dickens.

A literature enthusiast like her future brother-in-law, Vincent, who at the age of twenty-seven already knew the whole works of Aeschylus, Dickens, Hugo and Shakespeare. Jo loved theater and often attended shows; in London she saw Sarah Bernhardt, whom she described as “languishing, charming, but not full of high art” (diary 2). She preferred, as a female model, George Eliot – pseudonym of Mary Ann Evans – a writer she considered a “superior woman”, already hinting toward her future as a strong supporter of the feminist cause.

She was a person endowed with a great spirit of independence, capable of emancipating herself from conventions in a society and an environment – the artistic one – predominantly male. In the diaries she proves contemptuous towards Parisian intellectuals, with whom she came into contact after her marriage to Theo, and eager to seek refuge in writing as an antidote to the “other’s passion for uniformity” and an instrument of investigation into herself. She turned out to be determined and enterprising when, having lost her husband, she moved to Bussum, a culturally very lively small town not far from Amsterdam. Here she opened a boarding house, Villa Helma, and began to weave relationships with critics, painters and writers. She made the inn a sort of museum and proudly showcased the paintings of her brother-in-law – on the fireplace, in the guest rooms, in the corridors – recalling the attention of onlookers and intellectuals of Amsterdam, who visited more and more often.

In this difficult journey, the first signs of change glimpsed in February 1892: “The art appreciation session on Vincent’s drawings is in Arti tomorrow evening.– I have high hopes – I have a feeling of indescribable triumph when I think that it’s finally arrived – the appreciation – the liking – I must go to hear what people are saying – what their attitude is. The ones who used to ridicule Vincent and call him a fool”(diary 4). Johanna was waiting for the reactions at the meeting dedicated to Van Gogh, organized by Arti et Amicitiae. It was an influential association of Dutch artists, and the president had asked for some of Vincent’s drawings. Following that event, the press slowly showed interest in Van Gogh and the galleries became more available. Nevertheless, despite her indefatigable commitment – or perhaps because of that – Jo was accused of incompetence and fanaticism, as she told us in the fourth diary.

These attacks were certainly not able to discourage her. Thanks to her tenacity, within a few years she managed to organize numerous exhibitions in different Dutch cities, up to the largest, held at the Stedelijk Museum in Amsterdam. Here, in 1905, she presented more than four hundred works by Vincent, in an event that, by dimensions, would have been unique for many years. She began to exhibit abroad but she always replied to the merchants who wanted to buy the paintings that they were not for sale out of loyalty to the indications found in the letters of Van Gogh: not to disperse the work, sell only to finance new shows, exhibit as much as possible. And, consistent with those indications, she focused on the artist’s son: “Keep all the treasures that Vincent and Theo have put together, intact for my child.” 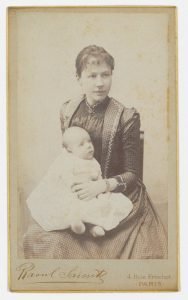 Much of Vincent’s work, in fact, was inherited by the painter’s nephew and thanks to this foresight, today we can admire it, intact, at the Van Gogh Museum in Amsterdam.

We owe once again to Jo’s commitment the opportunity to read the letters written by Vincent to Theo – a precious correspondence that allowed us to reconstruct the story of the painter’s life, representing a fundamental guide to shed light on his artistic universe and to deepen his figure beyond stereotypes. During the first World War, in fact, Johanna -who in the meanwhile had moved to the United States- devoted herself to completing the English translation of that correspondence and succeeded in publishing it in 1914, carrying out the job started by her husband. Many years before, she had chosen for the title page of her first diary the American poet Henry Wadsworth Longfellow’s words: “To act that each tomorrow / Find us farther than today.” This would be the motto of a life not lived in vain, speaking with her own words, at the end of which she could proudly say she had achieved something great or noble.