Reducing the number of MPs, tax breaks for families, and reduction of the tax wedge are today’s main topics of debate in the Italian public space. All are relevant issues with a serious impact on the countries near future. However, external observers, little involved with the animated national politics, strive to, not only, analyze processes on a larger scale but also discuss their long-term effects.

According to the Global Competitiveness Report 2018, Italy scores high in the areas of health and labour skills, market size, infrastructure, and capacity for innovation, but the financial system and public administration are matters of concern (along with India, China, and Russia, Italy is amongst the worst such performers in the G20). Italian economic growth, above all, is the most worrying factor of the international financial system.

“The situation is tragic but not serious” – to put it in the words of Ennio Flaiano – and is there for all to see: economic growth, populism, and migration are not issues that only concern emergencies but also must represent key elements on which to build future strategies.

The “Italy Today. Urgent Matters for Discussion: Economic Growth, Populism and Migrations” event, organized by the University of Leiden’s Department of Italian Studies in collaboration with the Dutch Ministry of Foreign Affairs (Wednesday, 16 October – The Hague) will discuss contemporary Italy, as well as the issues less in the spotlight yet urgent for future development. 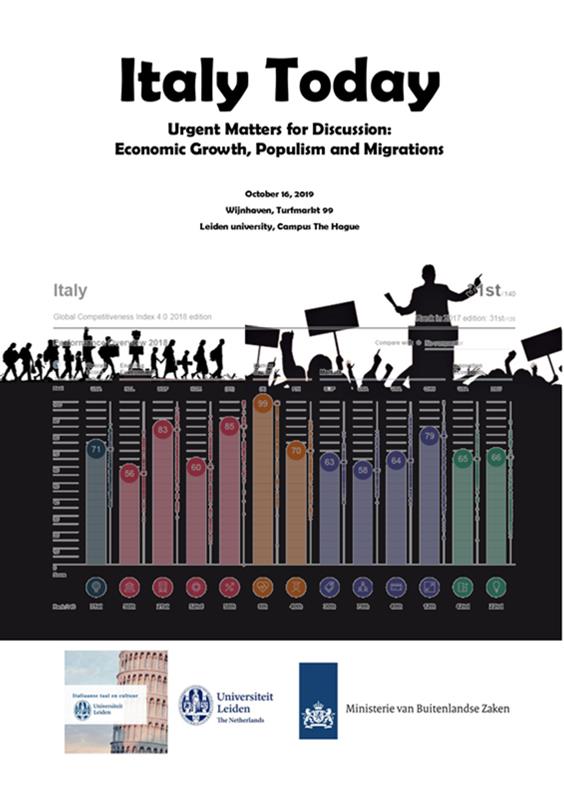 Four international voices, insiders and outsiders of Italy, from both academia and journalism will speak on the country and how it is preparing for future challenges. Political scholar Davide Vampa of the Aston University of Birmingham and Jarl van del Ploeg, Italian correspondent for Dutch newspapers de Volkskrant and Belgian de Morgen, will take part in the first panel.

Davide Vampa is a political scientist and studies political parties and politics at the national and supranational levels in Western Europe. Over the last few years, he has followed the consolidation of populism and the crisis of traditional parties, with a focus on the left-leaning. Vampa will discuss the emergence and strengthening of different forms of populism and how they have impacted the government and relations between Italy and the EU. He will also try to explain the process that led to the fall of the government Conte I last summer and the birth of the “yellow-red” majority.

Jarl van del Ploeg will talk about the crises that have put the Italian system under pressure in recent times: the financial crisis and that of migrants. The question he will answer is: why is the populist revolution in Italy far from over? Over the past four years, the Dutch journalist has traveled the country far and wide. He did not limit himself to only collecting the opinions of major political leaders but he also visited symbolic places of recent Italian history: from the Sicilian election campaigns of Campania to the events of Macerata in February 2018, from the neo-fascist demonstrations to Steve Bannon’s “populist monastery”.

From Africa to Italy

During the second panel, Eugenio Cusumano and Stefano Bellucci, both from the University of Leiden, will discuss migration management and its socio-economic consequences.

Eugenio Cusumano is an international security expert who mainly deals with the involvement of private actors in the management of land and sea crises. His speech will focus on the role of NGOs in rescue operations at sea in general and why they have been increasingly contested and criminalized by the Italian authorities.

Stefano Bellucci teaches History, Economics, and on the labor market of Africa – all central questions to throw a new perspective on today’s Italy. His speech will shed light on Africa as a continent for sending the workforce and the impact these dynamics have on Italy.

The event will take place Wednesday 16 October from 9:00 am to 12:30 pm in the Aula Magna of the Hague university campus in Wijnhaven, Turfmarkt 99.