I am Sunny, sex worker in Amsterdam: let me explain you my world

Sunny is a sex worker in Amsterdam. You will sometimes find her at the Prostitution Information Center, sitting on Enge Kerksteeg 3, ready to answer all your questions over a steaming mint tea waiting to be served. The Center is very beautifully decorated, pictures and posters adorne its walls, and towards the back is a spacious wooden table. People often take pictures from outside, but when someone tried doing so during our interview Sunny rushed to the window and waved her arms in disapproval, “we don’t want people to just take pictures, we want them to come in for a chat”.

Sunny mostly works through private escort services, but also has some experience in the Red Light District, “I prefer escort services because I have time to get ready, make myself pretty, and spend some time with the customer. Pressure is high when you are working in the Red Light District, everything moves quickly, you need to negotiate, and I am terrible at negotiating! I really respect the girls that power through 7-8 hour shifts.”

By volunteering at the Prostitution Information Centre Sunny hopes -through discussion over tea- to help break some of the stigmas that surround sex work: “The main stigma on sex work is that it’s never voluntary, that it always involves trafficking and exploitation,” she explains, “but this is simply not true. I’ve been a sex worker for 10 years. I would say society pushed me in this direction because I needed money, but it was always my choice. Many sex workers do it for the money, which in no way means it’s not voluntary”. Sunny has a management degree and rich work experience yet, after changing sex, she could no longer find a job neither in Belgium nor the Netherlands. Sunny hoped that her difficulty in finding employment 10 years ago was due to the fact that, despite having already undergone surgery, she still lacked a woman passport. However, 2 years ago she gave it a second attempt and the same scenario repeated itself. 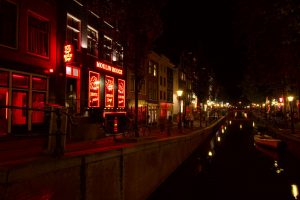 In Sunny’s experience, brothels are well equipped to ensure that the girls working in the Red Light District are doing so voluntarily, yet this doesn’t mean exploitation does not exist. A common phenomenon today is that of ‘book-keepers’. Foreign sex workers who speak neither Dutch nor English but wish to rent a room in the Red Light District often hire these so called ‘book-keepers’ to arrange everything for them, from finding an accomodation to filing paper work: “A registration at the chamber of commerce costs approximately 40 euros, but they will charge 300,” the implication is that the girls start working with a huge debt. Sunny is the manager of My Red Light -a non profit window brothel established to promote better labour conditions for sex workers- which is currently working to combat the ‘book-keeper phenomena’ by supporting aspiring sex workers with information pamphlets, translated into multiple languages.

Working in a brothel, Sunny learned that drawing the line between exploitation and choice can sometimes be challenging, “Imagine a couple where only the man works and uses his income to pay for his girlfriend’s car, vacation, food, etc. Now imagine a couple where only the woman works, as a sex worker, and uses her income to pay for her boyfriend’s car, vacation, food, etc. The first scenario is considered normal and acceptable, but many would be keen to label the second as exploitation. But is it exploitation, or is it choice? If the girl seems happy with her decision, are we in a position to judge?”.

Breaking the stigmas that surround sex work, explains Sunny, is also important for the profitability of the profession itself: “In late 2010 there was a lot of work, lots of money and the shifts were always fully booked. I’ve seen it decrease a lot in the past years due to the negative talk revolving around sex work, which is increasing”. 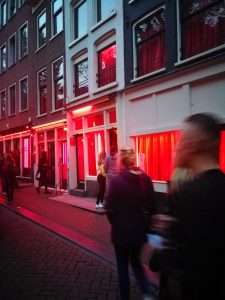 Indeed, sex workers have recently been a big target for politicians, adding flame to the stigma fire. “The previous mayor of Amsterdam, Van der Laan, closed many windows. Before him we had over 500 windows, now it’s around 330, and 70 are still to be closed. They justify these policies by saying they are doing it for our safety, but the truth is that closing windows hurts the sex workers -who face higher competition and rising rent prices- while profiting the brothel owners”. But tolerance towards sex work has now reached its lowest with Femke Halsema. If sex workers were expecting more support from the first ever woman to sit as Mayor of Amsterdam they have been proven wrong: “the WRS Bill demands for all sex workers to be registered in a ‘prostitution’ database, supposedly to combat trafficking and protect us. I do see the value of registering sex workers, but this is already being done: to work in the sex industry you need a chambers of commerce registration. The difference is that the chambers of commerce registration does not specifically state that your enterprise is prostitution. It’s well known, but it’s not smacked in our face. This new bill is worrying because, although they promise to keep the information safe, hackers these days can hack into anything if they want to”. According to Sunny’s calculations, about 85% of the girls want to keep their professional choice a secret, which would become rather challenging if the bill is passed. Another danger of the WRS Bill is that it risks to criminalize other forms of sex work, such as escort services, where many transgender people work. Indeed, all sex workers would require a license, expiring every 5 years, which does not imply a permit to work home-based. Municipalities can also set a maximum to the number of licenses, or choose to issue non all-together.

Femke Halsema is also proposing to close the Red Light District as we know it, and move it instead into a “big love hotel” outside the city center. “There are serious safety concerns to this,” explains Sunny. “Right now we are in the city center, it’s pretty safe here. There are cameras, there is police, and most importantly we are out in the open. But in closed hotels outside the city sex workers would have to worry about their safety”. This physical exclusion also risks to intensify the marginalization of sex workers, making them more vulnerable to hate crimes.

Sunny also discussed a further threat to the profitability of sex work: dating apps. “Apps like Tinder and Bumble make having sex easier and cheaper. Why pay a prostitute when you can set up a date, have pizza, and fuck?”

A surprising topic was that of tourists. Amsterdam-ers often think of tourism in the Red Light District as something negative: tourists are disrespectful to the girls and trash the streets. And while this sentiment was partly shared by Sunny, she quickly clarified that tourists are actually incredibly important for the business: “Tourism is necessary, we can’t work with locals only. In the last 6 months tourism has gotten quieter compared to the peak of last year, and this was hurtful to the business. But with tourists there is indeed the problem that they don’t know how to behave and respect our privacy. During my night shift I sometimes walk through the District and feel -if you’ll excuse the language- like I’m in a fucking zoo! People will always make jokes and giggle, that’s ok, but pointing and making the workers feel anxious and uncomfortable is not”.

The last thing Sunny talked to us about was the unbreakable bond that exists between sex workers: “The unspoken rule in our community is mutual respect. Whether I like you or not, we’ll all help each other out. I have seen sex workers hate each other’s guts and still running to help when one was faced with an aggressive customer”. The world of sex workers is a multifacet planet made of humans who interact on a daily basis and take what they do damn seriously: “There is an unbreakable bond between sex workers, because not everybody understands what it means to be one. What I also love about this community is that they are so diverse, so many nationalities and shapes. Our community is also a very positive one. We share stories, the crazy things we experienced, the money we made. We sometimes laugh about the people walking past our windows. Or when a customer is about to enter we make bets about how long he will last and start a timer. The record was 3.5 minutes”.