Greenpeace about Sea Watch: green activism and sea rescue are two sides of the same coin

Since EU discontinued search and rescue operations in the Mediterranean, and NGOs became central to the public debate on migrations, life-saving has become a hot, divisive topic mostly due to the often controversial relation between national legislations on immigrations and international humanitarian law.

But activism by the sea is not a new trend and the complex issues that arise when actions take place between internal and international waters while boats are sailing third countries flags is not a new subject. Although Greenpeace’ Arctic Sunrise protest against Russia in 2013 and Rainbow Warriors ‘80s anti-whaling and anti-seal hunting blockade look different than the current Sea Watch or Open Arms search and rescue operations, they have, in fact, much in common: environmental and humanitarian activism are actually two sides of the same coin.

“As Greenpeace, we definitively support their activities”, says Faiza Oulahsen, Greenpeace campaigner and activist who was involved in Arctic Sunrise international crisis, to 31mag.nl.

“We focus on environmental gestures but, of course, if you look at environmental activism and humanitarian activism, you can see two sides of the same coin, they are interconnected.” Faiza says. Both Sea Watch and the Arctic Sunrise sail under the Dutch flag, but the government of The Netherlands has dealt with the two cases in a pretty different way.

What happened with the Arctic Sunrise?

The Arctic Sunrise action took place 6 years ago, in September 2013. We were campaigning against the companies that were threatening the arctic by extracting oil there.

While attempting that protest, we were confronted by the Russian authorities that opened fire against our activists and ship. We had to pull back the crew because it was getting too dangerous for their safety; those events happened in international waters, close to Russian arctic.

Why did you choose the Dutch flag?

The freedom of expression and the right to protest, as we know are very much respected in The Netherlands, so this is why our vessels sails with the Dutch flag. There has not been any reason to change it so far.

In 1989, the Netherlands introduced the so-called ‘open arms’ policy. Since then, organizations with idealistic objectives (ngo’s) have been able to register their ships as private pleasure boats. This allows us, but also other organizations, to own a ship without incurring the high costs of certifying a commercial cargo ship or a passenger ship. The Netherlands is often chosen as the base of NGOs. 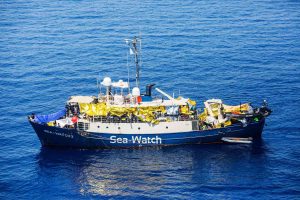 Which actions did the Dutch government take? Did you feel supported by them?

Yes, absolutely. At that time, I remember when the Russians wanted to board our vessel; the Dutch government basically said ‘no, you have no right to do so and we are not going to give you any permission to do this against a peaceful and non-violent protest’. The Russians did it anyway and, as a response, the Dutch government decided to act upon it and to sue them in front of the international law of the sea. And, at the end, we won. We were exercising our freedom of expression, our human right, we didn’t break any law.

What do you think of the Sea Watch’s latest mission? Do you feel close to them?

We focus on environmental gestures but, of course, if you look at environmental activism and humanitarian activism, you can see two sides of the same coin, they are interconnected. And, if you also look at how Greenpeace started: ’The Green Peace’ was the name since the beginning of the 70s and the name itself explains the idea of fighting for a greener planet and peace. So, we have always fought for environmental justice, but also for inclusiveness and a democratic planet. Climate activism is pretty much connected to human rights. The fight for a better and greener future if you don’t have human rights and the freedom to do so would be impossible, and I think this also applies the other way around. So I think it’s in the DNA of how Greenpeace started, and we definitively support Sea Watch in their mission to save those people.

Greenpeace is the first, or at least one of the first, organizations that took activism to the “sea ground”. This methodology is nowadays often used also by humanitarian activism, especially in the Mediterranean Sea. Do you perceive any similarity between your environmental “on sea mission” and the humanitarian ones? Is there any idealistic common thread between the two activism?

Yeah, we started doing activism by sea in the late 60s. Taking action, non-violent protests, and actions by sea has defined Greenpeace since the beginning. And yes, environmental and humanitarian activism by sea are strictly connected. For instance, in one of our first protests, one against nuclear experiments in Mururoa, in the French Polinesia we used our ships to evacuate the indigenous communities that were suffering from nuclear testing and getting sick from the radiation in that time. In that case, we used our ships also for a humanitarian purpose and that explained how environment and justice are connected with human rights.

At this point, I think that one should definitely wonder what purpose is trying to serve here. Do you want to respect international law, do you want to respect human rights and really make sure that you increase the safety and security of the ship and the people who are affected, or are these just anti-immigration policies? Because these things don’t go together.

How relevant is the visibility’s factor in your missions? Using media, creating a specific image of yourself.

Very much. This is how Greenpeace started, with the intention of raising awareness, especially considering that we practice non-violent activism. Sometimes, we get the allegation of doing that just to get media attention and what can I say? Of course it is, because in activism, media have a crucial role in telling what’s happening to other people. So yes, visibility is a crucial point. Public opinion is necessary to make a change. The object is always to mobilize people and let them know what is happening so as to give them the tools to build their own opinion and take action.