From catwalk to criminality: the story of the hoodie

A seemingly universal staple of fashion and athletics, the hoodie is also as much a recurring symbol of socio-political strife.

At the same time coopted by high fashion, and viewed as an emblem of deviance and criminality, the long, tempestuous journey of the hooded sweatshirt comes to Rotterdam’s Het Nieuwe Instituut in the form of a first of its kind exhibition. Entitled THE {HOODIE}, the exhibition, written and curated by Lou Stoppard, aims to provide its own narrative of contemporary times. Hot button conversations around racism, youth culture police brutality, privacy, social inequality, and more can find a common denominator in this seemingly (to the masses) anonymous garment.

From its early days as a practical piece of athletic gear created by Champion, to its ubiquitous presence throughout various facets of youth culture, the hoodie is one of those unique items whose cultural interpretations sway drastically based on geography, age, gender, and ethnicity.

With this in mind, we managed to speak with Lou Stoppard about THE {HOODIE}, and why she felt this to be the time and place for such an exhibition. From its use in the attempted character assassination of Trayvon Martin to its potential against the inevitable surveillance state, Stoppard tells 31 Mag all about the hoodie and its history. 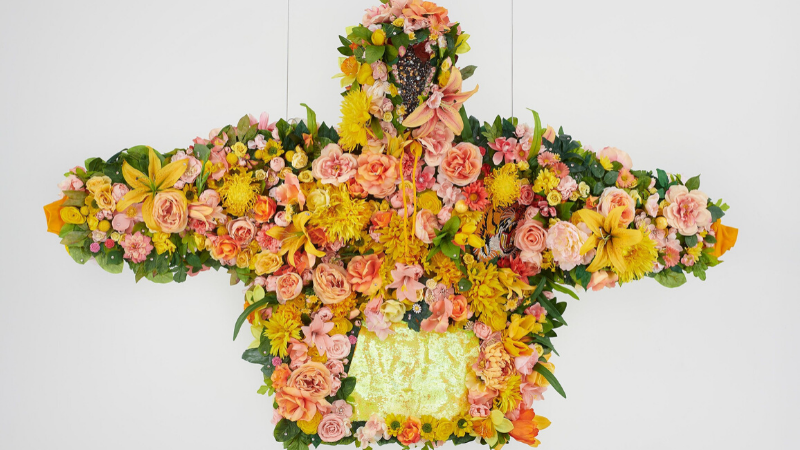 When was the original seed planted as an idea for this exhibition? How did this initial idea line up with your previous interests in the hoodie, both as garment and as political symbol?

The hoodie has been in and out of the news for a significant proportion of my teenage years and adult life. In the UK, in the mid-2000s, there was a period of moral panic around the hoodie – young men were getting ASBOs stating that they couldn’t wear them during certain hours or in certain places, shopping centres were banning them, and politicians even started a much-mocked ‘Hug a Hoodie Campaign’. Later, in the US, coverage and agitation around the hoodie continued with horrific events like the murder of Trayvon Martin. At the same time, the hoodie was emerging as a key new part of high fashion – a sign of the influence of streetwear and sportswear on luxury brands.

So, while the hoodie was being maligned by some media as an emblem of deviance or crime or rebellion, it was also being heralded as a trend in some glossy magazines. It felt like there were so many stories being told that, in turn, reflected broader societal issues. I felt that this garment was certainly the one that spoke the most about this generation, in terms of Western fashion. In a way, I was surprised that no one had done this exhibition before.

Can you discuss how the exhibition came to be at Het Nieuwe Instituut?

Well, Rotterdam has a thriving history of subculture and music culture, which made it feel fitting. Plus there are many great Dutch artists relevant to the topic – an obvious one is of course Exactitudes.

Het Niewue Instituut focuses on design, digital culture, and architecture. Those all felt really pivotal to the hoodie’s story – the hoodie is a great design object; digital, especially social media has been so important in terms of how stories and protests, around its treatment have spread; and architecture is relevant in terms of thinking of the hoodie as a space that one occupies, to feel safe or to disappear from the world. I knew it didn’t feel right to do this show in a ‘fashion’ space or a typical art gallery environment, so this museum felt fitting. 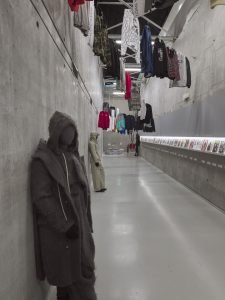 Can you discuss a little about the layout of the exhibition?

There are many stories within the exhibition – themes covered include the history of hooded garments, the emergence of the modern hoodie, issues around CCTV and surveillance, debates around racial profiling and police brutality, the sustainability of clothing production, the uniforms and styles of subcultures and different music movements.

The show is loosely ordered around topic, but many overlap and many objects are juxtaposed – historical pieces with contemporary garments, photographs alongside ephemera and printed matter, digital pieces alongside artworks. In a way, it all serves to show how intense and, often, contradictory existing coverage and discussion of the hoodie has been. Of course, one can spot some design interventions within the show – the mannequins, for example, seem to resemble other visitors, rather than formal forms of display, in the way they are posed and arranges. Often, I’ve noticed visitors mistake them for real people. Some of the mannequins are posed to be looking at other objects in the show – my intention there was to acknowledge the process of institutionalizing a topic of this kind, of putting the hoodie in a museum to be looked at and analyzed.

The broader design obviously uses a lot of fabric as walls and partitions within the space, which nods to the fact that the hoodie is a garment, the product of a set of pattern pieces. Similarly, the graphics nod to clothing labels.

In The US, the hoodie has always been a central aspect of “character assassination” with respect to media and political depictions of certain (mostly urban) individuals. Can you discuss a bit about this history of the hoodie used in this vane?

I think the hoodie has become almost like an emblem for a certain type of person. In the UK, sometimes people even refer to ‘hoodies’ to mean a group of people – invariably young, working-class men. Lots of the objects in the show try and consider the factors that have built these stereotypes. Some artworks that directly responded to events involving the hoodie, such a Devan Shimoyama’s floral hoodie artwork, a tribute to Trayvon Martin.

I also commissioned work that directly considered media representations of the hoodie, such as a brilliant film installation by Bogomir Doringer, which looked at how headlines, films, videos, news footage, and social media have contributed to habits of thinking. I also looked to ephemera and user-generated content that has shaped the hoodie’s journey – an important example includes tweets posted in response to the 2014 death of Michael Brown. To highlight the media’s role in propagating stereotypes, and as a means of objecting to images of Brown used by the press, young people of colour started using the hashtag #IfTheyGunnedMeDown online, posting juxtaposing pairs of images of themselves online; one at their graduation, at work or at a wedding, alongside the image they believed the media would use if they were killed. In these, they often wear gold chains and baseball caps. They smoke or pose with alcohol. In most, they wear sportswear, in many cases a hoodie. 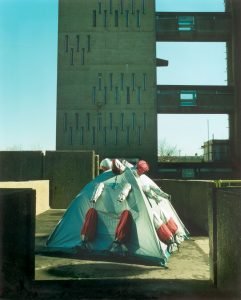 What do you think the future of political fashion is?

Some designers approach ‘political’ fashion through the surface – slogans, prints, etc. Others think about how to embed their politics and principals into each piece. An example of this is various designers thinking about the way our clothing can protect us against CCTV or surveillance, or prepare us for protest, such as Project KOVR and Adam Harvey, both of whom are featured in the show. This kind of work has been going on for a while – also featured in the exhibition are Vexed Generation, who were pioneering in making pieces that directly responded to laws and regulations around protesting, assembling and surveillance in the 1990s.

How do you reconcile with such a political garment being coopted by high fashion?

What struck me when working on this exhibition is how so much of the history of the hoodie is a story of changing contexts and appropriation. The early hoodie is designed by Champion for sportsmen but is quickly adopted by labourers. It is then adopted by hip hop musicians as a key part of their style. Then, later, high fashion takes it. I think the popularity of the hoodie today has been fuelled by the significant influence of hip hop on fashion and culture, but also because of the ever increasingly casual, sporty ways people get dressed, which in turn have been shaped by more practical matters, such as the breakdown of workplace dress codes and gendered formalities sand the rise of freelancing and new industries such as tech. The use of the hoodie in high fashion isn’t just sparked by cynicism, it’s a complex process that has taken it from street to catwalk.

THE {HOODIE} continues until April 12, 2020 at Het Nieuwe Instituut Rotterdam